There are numerous technology tools utilized within the healthcare industry. One of the newest with the potential to drastically improve patient outcomes is artificial intelligence (AI).

As noted in our recent blog, the global AI market is forecast to reach close to $89 billion annually by 2025. Used in conjunction with cloud computing, it is poised to bring about major transformations in the healthcare space.

Although AI offers much promise for healthcare, it also has its limitations, including what’s referred to as algorithm bias. A term initially defined by members of the co-directors of the Applied Artificial Intelligence for Health Care program at the Harvard T.H. Chan School of Public Health, it describes how AI technology can be negatively impacted by social, economic and systemic biases.

Another explanation of algorithm bias is the application of an algorithm that compounds existing inequities in socioeconomic status, race, ethnic background, religion, gender, disability or sexual orientation and amplifies inequities in health systems. A primary reason for this occurrence is that medical researchers cannot easily procure large, diverse medical data sets.

Research has been conducted to prove AI algorithm bias and has shown that:

A previous study published in the magazine Science found that a healthcare risk-prediction algorithm utilized by hospitals and health insurance companies to manage care for approximately 200 million people annually in the United States demonstrated racial bias due to its reliance on a faulty metric for determining need. The study found that the algorithm was less likely to refer black people than white people who were equally sick to programs designed to improve care for patients with complex medical needs.

Algorithm bias is a problem affecting a healthcare system that already displays barriers to healthcare equity, including unequal testing and treatment, bias in medical research and data and institutional racism. Research data and medical records are less likely to represent various minority groups’ black patients’ information adequately and accurately due to socioeconomic inequalities in healthcare delivery. Also, racial minorities and those living in poverty tend to receive lower quality healthcare than non-Hispanic whites and people with higher levels of disposable income and accumulated wealth. 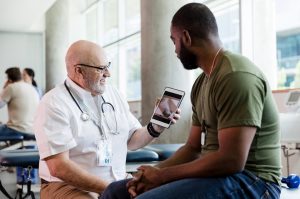 Health equity is also affected by social determinants of health (SDoH) (SDOH), which the World Health Organization (WHO) defines as “the conditions in which people are born, grow, live, work and age and circumstances that are shaped by the distribution of money, power and resources at global, national and local levels.” Up to 55 percent of health outcomes are impacted by elements outside of the control of the doctor’s office, including socioeconomic status, education, physical environments, employment, social support networks and more.

Solutions and Tools to Aid in Human Decision-making

A variety of solutions have been recommended for combatting algorithm bias in healthcare, from building data science teams to include professionals from a diversity of backgrounds and perspectives to training high-stakes medical AI algorithms with data sets drawn from diverse populations. Another suggestion is building the technical, regulatory, economic and privacy infrastructure to deliver the large and diverse data required to train these AI algorithms.

A perspective paper by Stanford University researchers theorized that, to ensure the safe and effective use of AI in healthcare, researchers and developers will need to work to eliminate bias in these tools by consistently evaluating them. Another best practice for achieving unbiased healthcare algorithms is investing in programs that promote data science training, offering grants and scholarships to encourage greater interest in the field among diverse communities.

Healthcare providers and payers can play an important part in reducing inequities within the healthcare system and improving patient outcomes within the clinical setting by deploying alternative patient outreach strategies that enable them to care for patients experiencing healthcare disparities in their communities, homes and jobs. Once they understand the individual needs of their patients, they can conduct patient outreach by directing patients to the most relevant resources that can meet those needs. 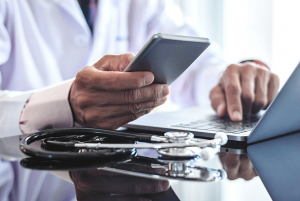 For example, patient outreach can be used to target populations identified as low-income who might be less likely to show up for scheduled appointments and procedures out of fear they won’t be able to pay for the services. Instead of patients experiencing poorer health outcomes for diseases that could have been avoided, this type of outreach offers them cost-effective alternatives for otherwise costly services. Similarly, proactively offering transportation options via patient outreach eliminates the need for patients to worry about their ride so they can focus on making healthy choices that are within their control.

Find out how you can expand your patient outreach without adding to your care team: Schedule a demo today with one of our skilled team members!